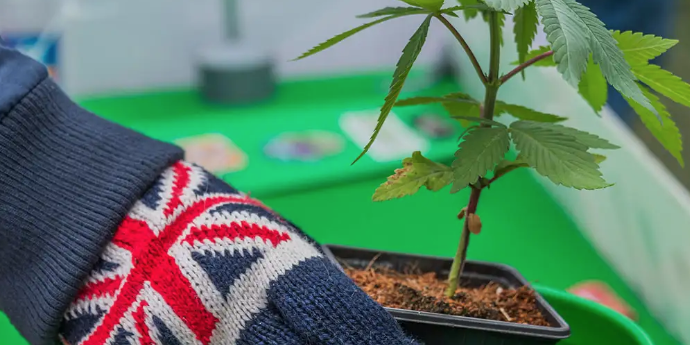 According to a recent report from

the EMCDDA – the amount of Britons

almost halved in little more than a

The statistics show that in 2000, almost 20% of the country’s young adults were using marijuana whereas the most recent figures, from 2013, indicate that this has dropped to just above 10%.When first embarking on this research, the question was simple: has Britain fallen out of love with cannabis? The answer, however, was not so clear.To put it in a nutshell; no one knows, and some even question the accuracy of the report. Even UK Focal Point – the sector of Public Health England which monitors drug use for the EMCDDA bases its report on – could not give a reason why the usage figure had almost halved.The most popular theories include harsher penalties and stronger strains of cannabis, which have put users off.One thing that many of the country’s leading experts do agree on, though, is that we need to re-evaluate the legal aspect of cannabis, for medicinal purposes at least.The UK has been left behind by other leading nations such as the USA, Canada, Holland and Israel in terms of pharmaceutical cannabis. Additionally Germany and Switzerland allow it to be imported from the Netherlands for medicinal reasons.

David Nutt, chair of research body Drug Science and professor of neuropsychopharmacology at Imperial College London, is one of the UK’s top drug researchers. In 2007, Nutt and colleagues published a report which looked at the relative damage done by different drugs.Unsurprisingly, alcohol and tobacco were ranked as much more harmful to the user and to society than cannabis was. “Tobacco kills older people, alcohol.kills younger people, cannabis doesn’t kill anyone,” Nutt told IBTimes UK.

Additionally, the researcher said that cannabis is saving lives in the USA where it has been made available for medicinal purposes because it is “protecting people against stronger painkillers like opiates.”“In the US, the States where they have medical marijuana, an amazing thing has happened; there has been a significant fall in deaths from opiate painkillers because people switch from opiates which can kill you with an overdose to cannabis which can’t.”The UK missed out on the chance to be at the forefront of developing marijuana as a medicine because of the “tyrannical” laws surrounding it.

However, those who have done their research don’t mince their words; cannabis is barely harmful to the user and theories that suggest otherwise is simply propaganda.Nutt continues: “As long as you don’t get caught with cannabis, it’s not going to do you any harm. The criminalization around cannabis is way more harmful than anything else that can happen with it.”This in turn creates a vicious circle. Nutt continues: “We spend half a billion pounds a year criminalizing people for cannabis. That money could easily be put to hospitals. All that criminalization does is create an underclass of people with criminal records who can’t work with the civil service, teaching, the armed services and so what do they do? They do more drugs because that’s all they can do.“We are wasting that money and we are also denying cannabis to people with medical problems who need it. It’s a double whammy.”Marijuana is not an addictive drug. The main issue around it is that it is habit-forming, which can create the illusion of the user being dependent on the substance. But as Tim Leighton, Director of Professional Education and Research at Action on Addiction, says, this takes a very long time.“Obviously there are people who go wild with a drug and within a few years they’re in trouble but usually it’s a 10 year process. So somebody

Starting to smoke cannabis at 13, they’re probably going to be 30 before there’s any recognition that they’ve become dependent and the vast majority of people using cannabis are never going to get dependent.”So how can the government make cannabis illegal and alcohol acceptable? Because of our history.Leighton continues: “Alcohol is our guns. Americans look at the immense harm that guns do and they say that ‘we’ve still got a right to have them’ and nobody will threaten that and to some extent that’s the attitude to alcohol here.”The overwhelming evidence that seemingly everyone but the UK government recognizes is that marijuana has the potential to be a top medicine. It can be used to treat patients with multiple sclerosis, spinal cord damage, epilepsy, chronic neuropathic pain, chronic pain following shingles, the side effects of chemotherapy for cancer, as well as early research showing signs that it even has anti-cancer properties, to name but a few of its medical benefits.However, in the UK marijuana as a medicine is currently in Schedule 1 – meaning that there are no medicinal benefits to it according to the powers that be. Heroin, however, can be found in Schedule 2.A recent report from Val Curran, professor of Psychopharmacology at University College London, one of Britain’s leading experts on the benefits of medical marijuana, along with co-author Frank Warburton, urged the British government to relax the laws regarding medicinal use of the drug.Curran said: “Patients are suffering unnecessarily…”. The report concludes with: “An adjustment to the current UK control regime to give patients the right to medication that they believe works for them is unlikely to have any wider impact on the level of recreational cannabis use.”