Inside the legal cannabis oil laboratory in Stockport 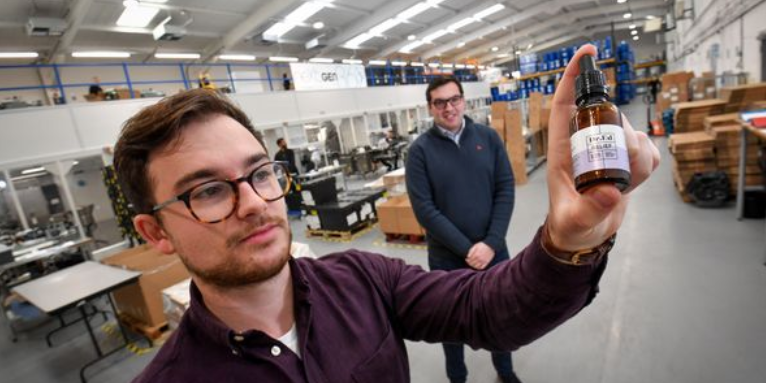 One Greater Manchester business, which produces its own range of CBD oils, is on a mission to educate consumers – and is calling for more regulation in the saturated marketSource

It’s a drug that people claim can treat everything from cancer to depression and anxiety.

Cannabidiol (CBD) oil – a legal and naturally-occurring compound found in cannabis – is said to offer health benefits that are both physical and mental.

So much so, that one user is bold enough to say it has ‘changed his life’.

But are some online companies taking advantage of the global hype with wild claims and substandard ingredients?

One Greater Manchester business, which produces its own range of CBD oils, is on a mission to educate consumers – and is calling for more regulation in the saturated market.

Alex McMillian, 24, has teamed up with neuroscientist Dr Edward Jones, 27, and the pharmaceutical-grade laboratories at NextGen360, to create the CBD range named Dr.Ed from their base in Stockport .

Alex turned to using the drug after struggling with anxiety for six years from the age of 18.

He was prescribed medication from his GP and attended therapy sessions, but it wasn’t until he stumbled across cannabis oil online with its countless recommendations from dedicated Facebook groups that he started to notice a difference.

However, with every drop taken, Alex found the effects would fluctuate, with varying percentages of ingredients and wild marketing claims.

“When I first had anxiety at the age of 18, I thought I was just a really worried person and I didn’t really know what it was or what to do,” said Alex.

“The drugs I took from the doctors made me feel exhausted. I just felt like nothing.”

Once he began work in his own marketing agency, he found that on a daily basis, little things could spiral quickly out of control.

He added: “I would go days without opening an email because I would convince myself that it contained bad news.

“But with more and more people talking about mental health, with speaking to people, I found out about CBD and after taking it, I felt calm without any side effects.

“It soon faded and I found myself having to work through the legitimacy of recommendations because some were ‘bedroom-blended’. The ones people were saying were the best were literally theirs that they were making at home.”

CBD is extracted from hemp, which is a variety of the cannabis sativa plant. CBD products are legally only allowed to contain 1mg of THC, which is the psychoactive substance found in marijuana that produces its mind-altering high.

This amount of THC is legal in the UK, however Edward is calling for the government to be clearer on their stance once the compound is bottled, as well as arguing for the quality to be controlled.

Surveys this year by Dynata and YouGov indicate that between 4-6 million UK adults have tried CBD. The market is currently growing at double digits and is expected to be just short of £1billion in 2025.

This would be equivalent to the entire UK herbal supplement market in 2016, according to the Centre for Medicinal Cannabis (CFMC).

CFMC tested 30 oil products available in the UK (both on and offline) and found 38 per cent had less than half of the advertised CBD content. And one product had 0 per cent CBD, which is the most expensive ingredient.

Almost half (45 per cent) had levels of THC above the legal limit, which are therefore technically illegal in the UK. One product contained 3.8 per cent ethanol, which technically means it’s an alcohol-based drink.

Although the UK industry is one of the biggest in Europe, its raw ingredient is produced outside of the UK.

The Stockport-based laboratory blends a major fat from coconut with 90 per cent CBD extracted from Californian hemp.

Several types of CBD oil are mixed along with essential oils called terpenes.

“The extraction process is crucial. Some companies use butane, alcohol, petrol, and other nasty chemicals to be able to remove CBD in cheaper ways and some of that extraction liquid can end up in the final product,” explained Dr Edward.

“We work with a group of stringent farmers who have modern irrigation techniques and strict rules on the use of fertilisers and pesticides, which leaves us with a cannabis oil that has a high concentration of CBD by weight, only wasting 20 per cent of plant matter.

“It would be easy to make a fast buck in this industry just by selling any old tat, because the government doesn’t seem to care, but we need to care because this industry will get destroyed if the bigger players and people like us don’t take a stand and say lets make it right.

“The government needs to be clear on firstly, the legality, with a clear statement on their position on CBD, a list of technologies which are or aren’t allowed in the production of CBD, and if they catch anyone using butane for example, there should be penalties, and for advertising against the rules.

“If you go on Ebay, Amazon or just online and type in CBD oil, some results will say ‘got cancer? Try CBD’ and it’s not fair to consumers because the evidence does not say CBD cures cancer in humans.”

With more than three million anxiety disorder sufferers in the UK, according to Anxiety UK, and 28 million people affected by chronic pain, according to the NHS, it’s no wonder that some people are looking for alternative treatments.

“The government has underestimated how many people want to try CBD. There’s been an explosion in the market and now they lag massively behind. The industry is becoming almost too powerful for them to step in,” the scientist continued.

“And it’s not just the creators that need to have a duty of care, the big health care brands that are selling CBD, as well as CBD cafes for example – they need to be transparent to the consumer about exactly where the product has come from, how, and what’s exactly in the bottle.”

A government spokesperson told the M.E.N: “We have always been clear about the legal position on CBD.

“We advise a cautious approach to these products and companies should seek legal advice to ensure compliance with the law and ensure products are safe.”

CBD was first isolated in 1965, but the longest term study on its effects lasted six months using animal models, where no ill effect was found.

Alex and Edward have deliberately shied away from stereotypical cannabis imagery in their branding to break down any stigma of CBD being attached to the Class B drug.

They want to make their customers feel comfortable taking it wherever they are, including the office.

“CBD has changed my life in so many ways,” added Alex.

“At work, I now have confidence and the focus to actually get stuff done. Depending on how bad my anxiety was, I wouldn’t go out with my friends. I would tend to shut people out because I thought no one understood, but my personal relationships have now also benefitted.

“CBD easing my anxiety has made me a better person – I’m more available to people, better at my job, a better family member.