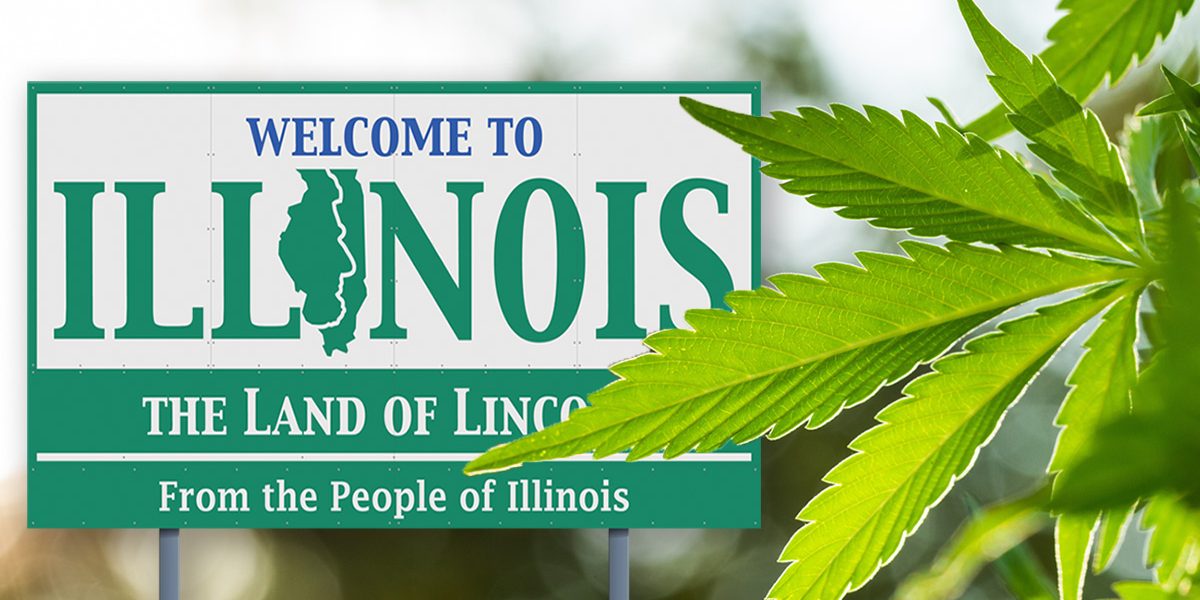 Illinois is the 11th US state to legalize recreational cannabis with taxation revenues to help poor communities and address social inequities.

Illinois has become the 11th US state to legalize the recreational consumption and sale of cannabis. Democratic Governor Gov. J.B. Pritzker signed a bill into law fulfilling a campaign promise he made last year before his election. Illinois joins 10 US states plus the District of Columbia that have legalized recreational cannabis. Previously, Illinois residents caught with a small amount of cannabis could land themselves in prison for six months or even worse.

The new law will also expunge the convictions of approximately 800,000 Illinois residents who have convictions for pot. Several other states that have legalized have also established expungement procedures, however, Illinois’ new law will allow near-automatic wiping of criminal records or arrests relating to weed, providing there are no violent crimes associated with them.

Like the UK, in the USA a petty cannabis conviction can be a barrier to jobs when it comes up on a criminal background check. Offenders are “forced to live in permanent second-class citizenship … and forced to face those collateral consequences everywhere,” said Rep. Jehan Gordon-Booth, a Peoria Democrat who was instrumental in pushing for expungement to be included in the bill. The new law which Gov. Pritzker signed into law last Tuesday borrows much of its scientific, economic and technical details from states where lawmakers have already introduced a legal taxed and regulated cannabis market, such as Colorado and Washington State.

The new legislation seeks to give a helping hand to low-income communities that have borne disproportionate shares of the fiscal and social costs of the so-called War on Drugs. These poor communities will be will have a boost in the race to secure grow-shop and dispensary licenses ahead of the laws scheduled implementation date of January 1st 2020.

The very same communities will be the first in the queue to receive direct investment from the new marijuana tax revenues the state will generate. 25% of the tax money will be legally obliged to be set aside for the new “Restore, Reinvest, and Renew Program,” colloquially known as “R3.”

This makes the 11th state to defy Federal restrictions on cannabis the first to specifically address social inequities that have been borne from President Nixon’s War on Drugs. Democrat, Rep. Jehan Gordon-Booth said: “The high economic barriers to entry to legal cannabis sales around the country have already created an industry where profits are largely extracted by people already rich enough to be professional investors. “What we are doing here is about reparations.

After 40 years of treating entire communities like criminals, here comes this multibillion-dollar industry, and guess what? Black and brown people have been put at the very centre of this policy in a way that no other state has ever done.”

USA IS LEADING THE WAY FORWARD

This is in stark contrast to the UK where the governing Conservatives have repeatedly ruled out legalizing recreational cannabis and have only made minor botched changes in the law relating to medical cannabis.

Last year, the British government made small changes in medical cannabis laws that only allows patients to obtain it after jumping through hoops of fire to get a prescription that is only available privately costing thousands of pounds.

They also made sure the only people allowed to grow cannabis or supply cannabis-based medicines were very rich people with connections to the Conservative Party, including the Prime Minister’s and Drug Minister’s husbands. Conversely, in Illinois, legislators have ensured there will be no financial barrier for the predominantly Black and Minority Ethnic (BME) victims of President Nixon’s War on Drugs. Illinois will waive half of the application fee for license-seekers who are either long-term residents of a Disproportionately Impacted Area (DIA) or who have been incarcerated for a minor pot crime that is eligible for expungement under the bill. Social Equity Applicants (SEAs) can also cite a direct family member’s incarceration as grounds for this legislative high-speed lane through the canna-business red tape. It doesn’t stop there either. It is enshrined into law that SEAs who are granted licenses to sell or grow cannabis will be eligible for direct grant aid for start-up costs, special low-interest loans from the state and other booster-seat mechanisms.

The legal sale of recreational pot in Illinois will start at the beginning of 2020. Anybody who has been arrested or convicted for possessing or selling up to 45 grams may petition a court to have that record expunged at any time. Additionally, a near-automated system of wiping out smaller possession cases will begin immediately too.

Meanwhile, the fight for sensible cannabis law reforms in the UK will continue. Niamh Eastwood, Executive Director of Release, said: “Illinois State’s cannabis laws should be lauded for ensuring reparations for those most damaged by the war on drugs, in particular people of color who have been over policed and subject to mass incarceration, was front and center of the reforms.

“The fact that the social equity elements of the law were a priority for the legislators should be a blueprint for other jurisdictions who move forward with cannabis legalization. It is inevitable that the UK will eventually see a move towards a regulated market for cannabis and at Release we will be advocating for the type reforms we are witnessing in Illinois” Chris Bovey is a businessman and an Executive Director of NORML UK, which campaigns to reform cannabis laws in Great Britain