Cannabis May Help Veterans With PTSD – Lawmakers May Be Acknowledging That 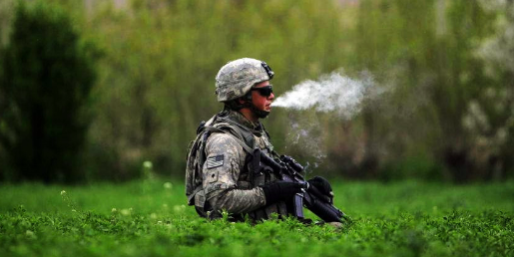 After 17 years in the military and Special Forces deployments in nearly every terrorist hot spot on Earth, former Green Beret Adam Smith found that while his military battles had ended, his personal one had not.

“I had a hard time sleeping lots of anxiety, lots of hyper-vigilance, all the symptoms that revolve around post-traumatic stress,” Smith, in an interview, remembered of his difficult transition to civilian life, starting in 2015.

“I found myself hopeless, in a very bad place,” said Smith, who also suffers from the effects of multiple past brain injuries. “The bottom of this hole was me sitting on a couch with a pistol in my mouth.”

Thankfully, Smith didn’t go through with it, and says that in the years since, what’s helped sustain him, lessened his joint pain, soothed his sleep and moderated his constant, awful sensation of feeling always “switched-on,” has been … self-medication with cannabis.

Smith’s just the kind of veteran lawmakers are trying to help with two U.S. House bills that passed out of the House Committee on Veterans Affairs on March 12:

H.R. 1647, the Veterans Equal Access Act of 2019, allows physicians to complete state-legal medical marijuana-recommendation paperwork. Because VA doctors are currently prohibited from doing this, vets must turn to private out of -network physicians (Interestingly, previous legislation with this same goal got nowhere.)

However, while being reported out of committee is progress, Congress’s antipathy to cannabis – which, except for hemp, remains mostly illegal at the federal level — is harder: a vote by the full House. Given the understandable focus on coronavirus and Congress’s longstanding opposition to cannabis, a House vote this session is hardly a given. NORML Political Director Justin Strekal would say only that the likelihood of a full House vote is “unclear.”

That’s irritating to Smith, who says that, “When it comes to veterans and veterans’ rights, all legislation on the left and right, the game of politics should not exist.”

Smith has done more than just gripe about politics; he’s publicly talked about his personal avoidance of Veterans Administration treatment because of its chosen response to suffering veterans. That response, Smith says, consists merely of treating vets’ symptoms with anxiety meds, high blood pressure meds, sleeping pills. These are “just medications for the symptoms that aren’t necessarily treating the total patient,” Smith says.

He says that his own epiphany came in 2015 when he tried marijuana for the first time, alongside a military buddy who said marijuana s had sharply reduced his seizures and improved his sleep. Though there’s no hard data to support cannabis as a remedy for PTSD, many veterans swear by it.

Smith too became a believer, and last fall started a Kentucky-based CBD tincture company addressing veterans. In-your-face marketing on the website includes this home-page text: “the most damned patriotic hemp products you can get. American grown premium hemp products for everyday patriots, veterans, and warriors.”

Then there’s a tongue-in-cheek video in which Smith portrays himself as a beer- and-bourbon-drinking, gun-toting, pickup truck-driving “American” who can make any damn choice he or she chooses.

One of those choices has to do with cannabis. And in that regard, along with the humor in the video, Smith addresses the more sobering problem he wants to help solve: the data showing that 22 veterans a day take their lives. “It’s not just the veteran community; it’s also the law enforcement and first responders that are having a similar battle,” Smith says in the video.

More and more Americans agree. A recent YouGov.com poll of 5,369 U.S. adults, reported on NORML’s website, found support for the notion of CBD treatment, with 53 percent of those polled agreeing that that medical dispensaries should be considered “essential services.”

What seems here like a cultural shift may have as much to do with the current anxiety engendered by the coronavirus crisis (which has spiked cannabis sales) as it does the different sort of pain veterans and first responders experience.

Witness the Politico opinion piece, reported on WeedWeek’s site, which stated that, “Weed shops are essentially being treated the same as pharmacies, reflecting a dramatic shift in cultural perceptions about the drug over the last decade.”

The question is how many in Congress are paying attention.