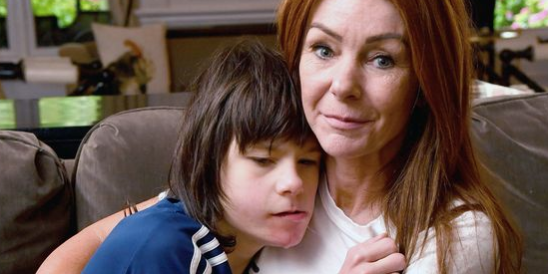 The mother of a County Tyrone boy with uncontrollable epilepsy says other children with the condition should be allowed to try a form of cannabis oil.

Charlotte Caldwell claims her son Billy is 21-days seizure free due to a form of medicinal cannabis.

Billy, who is 11, flew home from treatment in the US on Monday night.

The UK‘s medicines regulatory body has said anyone considering the use of cannabis oil should discuss it with their doctor.

Ms Caldwell said that while she is not declaring that the oil is a cure, she wants all children who might benefit from it to be given a chance.

“What we have to remember is these are kids who have tried every other pharmaceutical drug that there is out there, cocktails of drugs, maybe four or five at the one time, and they are failing.

The product Billy is currently taking is CBD with a THC component.

Ms Caldwell was able to bring the medication back from the United States without being stopped by customs officials at Dublin Airport.

CBD and Tetrahydrocannabinol (THC) are two types of cannabinoids found naturally in the resin of the marijuana plant.

Unlike THC, pure CBD oil is not a psycho-active ingredient associated with the “high” in marijuana.

There is no restriction on the personal use of CBD oil.

However, the Medicines and Healthcare products Regulatory Agency (MHRA) is of the opinion that CBD products, used for a medical purpose, are medicines. Medicines need a licence to be sold and no businesses in the UK have such a licence for CBD yet.

CBD oil has not yet been licensed in the UK as a medicine but can be prescribed by doctors in special circumstances.

Billy has, at times, suffered as many as 22 seizures a month.

During his time in America, he suffered a seizure which left him in a coma.

“We took him to L.A. because of the long waiting lists here,” Ms Caldwell told News NI.

“It‘s a life-threatening form of epilepsy that he has, we had no choice but to go there.”

Ms Caldwell said the progress she had seen in her son was “absolutely amazing”.

“The seizures are brutal on a little boy,” she said.

“In the past weeks he has been more focused, had more eye , more social engagement, taking more interest in his books and toys.”

Gerald Heddell, from the Medicines and Healthcare products Regulatory Agency (MHRA) said: “Our heart goes out to Billy, his family, and to everybody in a similar situation.

“MHRA has come to the opinion that products containing cannabidiol used for medical purposes are medicines.

“We would recommend that anyone using or considering the use of CBD oil should discuss this with their doctor or another healthcare professional.”